So, it's now day 4 and this hen is seriously tucked into her nest all day. Maybe not all day, because I'm not sitting there watching her every second, but every time either of us goes check on her, she's there. Sitting. We are monitoring food and water consumption, so it appears that she is getting up at least sometimes to eat and drink. So weird. She's sitting on a few eggs of her own. I'm not sure how many, because I just don't want to disturb her because she's very skittish, and I don't want her to quit on them. The timing is actually pretty good because I have quail in the incubator that started around about the same day as she went seriously broody, so if things go pear-shaped (which is a distinct possibility), there is a plan B. Out of tragedy, there may be a celebration.

Back story: Sylvia was one of only three survivors in last summer's raccoon massacre, and the only one still with us. Willa also survived but was lame and never recovered. One pied male survived but after the experience, he went quite mad and had to be dispatched early on. Sylvia and Willa were buddies and lived in the special needs coop/pen until the first really cold snap in winter. At that point Willa was showing signs of suffering from the cold, so they both spent the rest of the winter in a pen on top of the dryer in the laundry room, where over the next months we propped her up many times a day next to the feed and the water so that she could eat and drink. They went back out to the special needs pen in the spring, but Willa's knees were so bad at that point that she couldn't get around at all and was not even able to dustbathe. As a result, there was a constant buildup of

around her vent area that had to be cleaned up daily. The assisted feeding and watering also continued. When she stopped showing any interest in food (this was really out of character), we decided that it was her time. So that left Sylvia, all alone. We had a blind male, Jeff, in the main quail pen that didn't seem to be coping very well with the general population anymore, so we tried integrating him with Sylvia, so that neither of them would be alone, but would have plenty of space for them to et away from each other. Initially, it didn't go well, but Jeff persevered/ managed to protect himself long enough for Sylvia to accept him, and they became roomies.
Then for some reason last week Sylvia turned on him again (we now think it was because she was going broody, and we didn't see the signs), and at some point, he flew out of one to the run doors that hadn't been latched properly, in order to escape Sylvia's ire. I am only hypothesizing on what transpired after that. I only became aware that something was amiss when I heard unusual crow noises in the backyard. Yes, you guessed it - the crows were busy with "offing" Jeff. I chased them off. Then I went to collect what I thought was the late Jeff, I found out that he was still alive. Wounded, but alive. His wounds turned out to be terminal, though - the crows had taken out the side of his beak and most of his tongue, as well as some injuries to his sides. He was still very feisty, so we gave him 2 days to show signs of improvement while trying to keep him hydrated via syringe. On the second day, it was very obvious that he wasn't going to get better, so we made the decision to euthanize him.
So now we are back at the point in time when Sylvia went seriously broody. This should be interesting.

2
RIP Scooby, AKA Awesome Dog. Too well loved to ever be forgotten. "Sometime in June", 2005 - January 24, 2017.
"Until one has loved an animal, part of one's soul remains unawakened" - Anatole France
Top

Wow quite the story, hopefully a happy ending.
0
Top

Thanks, @kenya . Well, it was short-lived. Yesterday she decided to pick another spot to sit and not move. No eggs under her, but she's still broody.

I already had some eggs in the incubator that I set around the same time as she did, so I popped hers in there with them.
3
RIP Scooby, AKA Awesome Dog. Too well loved to ever be forgotten. "Sometime in June", 2005 - January 24, 2017.
"Until one has loved an animal, part of one's soul remains unawakened" - Anatole France
Top

Great background story! Gotta have a Plan B!
1

I'm assuming these are coturnix? WOW very strange indeed! being the first domesticated bird in history, by the Egyptians, they lost all broodiness 1000's of years ago.

I so hope these work out!

are these jumbos? we need quail again. I have multiple quail cages and havent had any in SOOOO long.
1
Al

Yes, they are Coturnix quail - the regular size, not the jumbo. You're right, it is very uncommon for them to go broody in the commonly used wire bottom pen setting. However, it's much more likely when they are kept in a more natural setting such as an aviary or greenhouse. Ours live in aviary type settings (a 9' L x 6' W x 6' H John Suscovich tractor style covered pen and a 9' L x 3' W x 4' H covered raised pen currently in use as a special needs pen) using the deep bedding method. They have houses and dust baths and a number of places the hang out/hide out, including regularly replaced cedar boughs. I know of at least two people who have had quail hens go broody in similar settings. A lot of the time quail hens that go broody get bored of it, like our Sylvia did, but some actually do stick it out. However, there are not that many who are also good mothers, so it's a good idea to have a brooder ready.
3
RIP Scooby, AKA Awesome Dog. Too well loved to ever be forgotten. "Sometime in June", 2005 - January 24, 2017.
"Until one has loved an animal, part of one's soul remains unawakened" - Anatole France
Top

My quail hen hatched 3 babies. I think she might be thinking of doing it again, too... 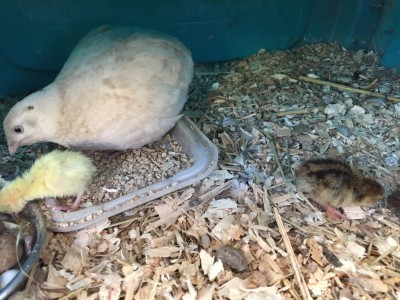 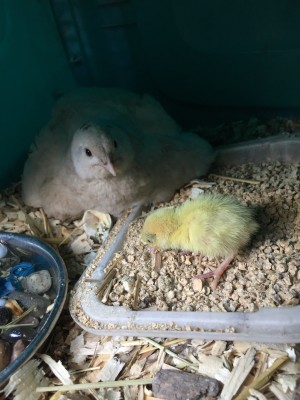