Found domestic duck at Guelph river - what to do?

Found domestic duck at Guelph river - what to do?

A week or two ago someone posted a pic of this duck paddling about downtown Guelph on the river (posted in a facebook group for lost pets). No one claimed the duck or (seemingly) tried to catch it.

Today, I was walking along the river and came across it. I believe it's female (by her voice and colouring... But not 100% sure). She did seem slightly stressed, trying to join groups of wild ducks. They didn't attack her but rejected her and would swim/fly away. She's quite small.

This is a domestic duck right? Swedish blue? I'm not sure what to do... I assume she's unlikely to survive on the river? I'd hate to "kidnap" her if she belongs there but I really don't think she does. Also, Im not sure I could even catch her... I have a hard enough time catching my own ducks, haha. I did toss a few leaves and rocks at the edge of the water and she did look interested... But was more concerned with following the wild ducks. (If I had tossed real food that might have been different).

I feel sorry for the little thing and would like to help if I can. Any suggestions? Anyone around guelph who could help? I intend to contact the humane society tomorrow, although i don't think they often will catch animals but pick up ones already caught. 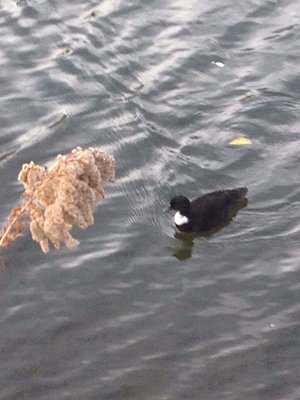 Re: Found domestic duck at Guelph river - what to do?

Swedish Black domestic duck, yes. Wild ducks will migrate when they start losing their food source to winter, but she will not survive unless someone feeds her, unless she can find a really sheltered spot where water never freezes and vegetation grows year round. They cannot fly more than a few feet off the ground, and not even that for very long.
0
Top

Re: Found domestic duck at Guelph river - what to do?

Don't take it home to your ducks / chickens if you care bout their health . They are carriers of avian influenza & other maybe deceases your ducks are not immune to but don't show it . We have all kinds of domestic ducks doing fine around our area like wild ducks some make it others don't . Luck
3
ENJOY YOUR HUNTING / FISHING HERITAGE & the GREATNESS of CANADA
Top
Post Reply
3 posts • Page 1 of 1