My new to me backyard garden

My new to me backyard garden

I moved to a nice part of Kingston in January to help my Dad who lives around the corner. In the winter I could appreciate the “bones” of the garden and side decks, but having to idea of the soils, and seasonal rhythms of the place I just decided go for it and see what I could do to make a functional garden but a nice one too.

The backyard was a mess after a family with several kids and dogs and a former renter who was a blacksmith lived here. There was a decrepit above ground pool which was taken out. So, as winter moved into spring I started planning, started tomatoes, peppers, zinnias and basil. It turned out the area under where the pool was had pretty good soil and because it had sat directly on the ground was essentially weed and sod free, the perfect spot for a garden!

Being Kingston, you discover pretty quickly that it’s all rock, everywhere. There were some beds ringed by rocks and everywhere I dug there were rocks! By the time I got things dug, I had more rocks so was able to extend the pathway from the deck that was mud with rocks and raised beds on either side made of rocks. I now have a pile of rocks for future projects as well.

I’m surrounded by large trees but in such an arrangement that the centre of the garden where the pool was gets sun most of the day and most of the rest of the gardens get a good 6 hrs but there is always shade for those hot sunny days too.

So here’s some pic of the garden now, potatoes in the bed by the blue wall, peas, beans, carrots, lettuce, garlic, onions, peppers, eggplant, zucchini, and tomatoes in the centre circle garden, herbs and strawberries in the beds beside the path from the deck and the last garden which will have pickling cakes. I also have English cucs growing up the back fence.

Looking forward to seeing how it all turns out and evolves through the year and enjoy the fresh veg. And start planning for next year! I even know where the chicken coop can go!

From the deck facing south east: 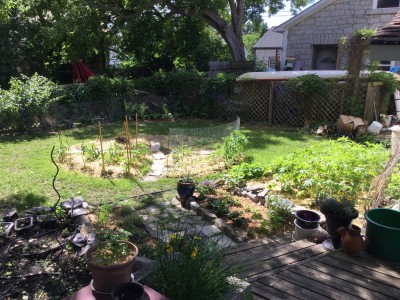 Detail of the pathway, one of the new raised herb beds and potato bed in the background: 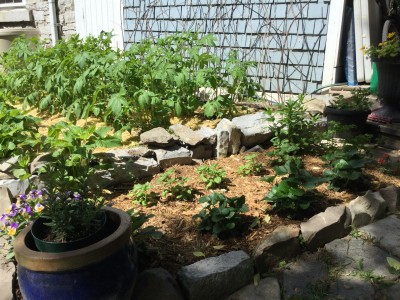 9
Former dairy shepherd and owner of a menagerie of chickens and Pencilled Turkeys, now owned by three cats.
Top

Yes that does look lovely!
0
Top