Your Rescue Cats & others

Let's see them!!!!
Forum rules
Any images that depict illegal acts or subject manner will be removed. You retain rights to your photos but by posting them here you also are agreeing to giving rights to PTO to remove or alter these pictures (size adjustment for example) as needed. To maintain memory usage at a low level we are entertaining deleting photos after a certain time period which at this point will be determined by the time when we run out of data storage capacity.
Post Reply
32 posts

Your Rescue Cats & others

Hi guys
In response to @Jaye suggestion please post your pics here!
I'll kick it off with Muppet adopting the position! 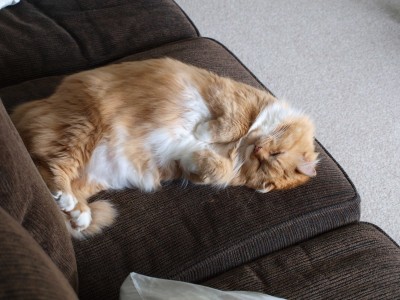 This is Shelby she used to be part of a cat colonie but I guess someone moved close with a dog and the colonie split up running for the hills. She ended up at our house and I started feeding her as it was in the middle of January and she has been with us since around 8-9 years. She likes to be petted now, took a year before we could touch her. She loves looking after the silkies and can usually be found watching over them. 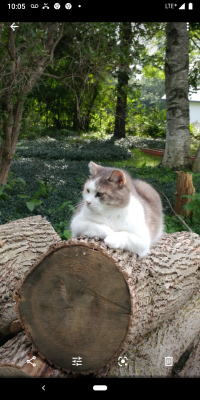 None of these pictures of cats that have been posted so far look like feral cats to me.

Maybe I have the wrong idea of how a feral cat should look, having only seen a few when there was still a colony beside the parliament buildings, but they look like normal domestic cats to me. And they are all so big and fluffy and laid back!
Last edited by Jaye on Fri Jan 24, 2020 4:48 pm, edited 1 time in total.
1
RIP Scooby, AKA Awesome Dog. Too well loved to ever be forgotten. "Sometime in June", 2005 - January 24, 2017.

I don't think feral cats have any specific look, it just describes their lifestyle.
0
Keeper of Columbian, Blue and Black Wyandottes
Top

If fed by humans they are NOT feral just JUST FREE RANGE .

3
ENJOY YOUR HUNTING / FISHING HERITAGE & the GREATNESS of CANADA
Top

I have others that come and eat with Shelby but you can't get near to take a picture and they have lived at my house for about 5 years. Some become more tame like Shelby some never do. I like them because they keep the mice down and the wild critters away (usually) They have never gone after the chicks or chickens but then I always have food out for them.
1
Top

This is Finnegan, I rescued him from the side of road. He was 3 weeks old and his mother was nowhere to be found. He is one lucky fella! 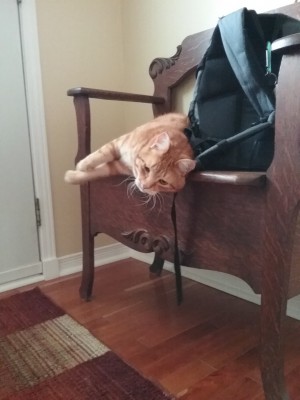 Its been about five years since we got her. I call her Puddle, Cath calls her Other Cat. The not yellow one closer to the window. She was absolutely feral. Was cold in January and Cath saw her near the neighbors, whose place she was minding while they were on holidays. She started leaving catfood in a carrier, took about a week then she caught her.

Took her to the vet, and he said she was full of babies. But exrays said she was horribly constipated. Spayed. then brought her home, turned her loose in the basement, she caught onto the littler box, but I don't think we saw her for over a month. Then you could catch a glimpse now and then. Took close to four years for her to become a semi normal cat. Last winter she seemed to have some kind of change, and she adopted us.

You still cant pick her up. Lacerations and bandaids required to try. But she will come sit near you on the couch, and wants petted. If you ignore her, she starts tentatively poking at your hand with a pw. Barely touches you with the hair, but will keep it up til you acknowledge and pet her. Any company, she just disappears. But so does Kiwi, the big yellow and white butterball in the picture with her. 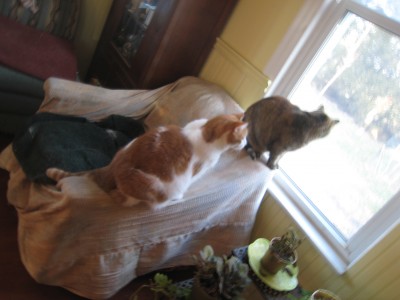 3
Farrier1987. South of Chatham on Lake Erie. Chickens, goats, horse, garden, dog, cat. Worked all over the world. Know a little bit about a lot of things. No incubator, broody hens.
Top

OK I'm starting to think that feral cats are a thing with chicken people! Whats up with that!? How do we all have one???
Farrier the cat that you describe is EXACTLY my LB. I will have to get a decent photo of LB. I looked but dont have one on my new phone and it's too much work to dig one off my computer.
1
Top

Vian says that Muppet was not FREE RANGE but FREE RUN. Sat on the patio for 5 minutes and ran straight back in to his food bowl. We think he had been a drop off and lived wild for several years that we know of. We saw him sleepng in snowbanks in winter. Vian built an outdoor cat house for him and left food out. When our old boy died, Muppet just walked into the kitchen one day. We could brush him right away and he knew the litter box. Took a year to persuade him he could come upstairs and sit with us, then he never left LOL.
@Happy I think we all have a sign on the house that says "Suckers live here" Still waiting for our next one to pick us though.
1